Lynsey completed the run in a personal best of 69 minutes knocking 4 minutes off her previous best time. Thank you to everyone who sponsored and supported her helping to raise over £500 for Darnall Dementia Awareness Group.

To raise money for the Darnall Dementia Awareness Group Lynsey is taking part in the Rother Valley 10k held on the 12th of April 2014. 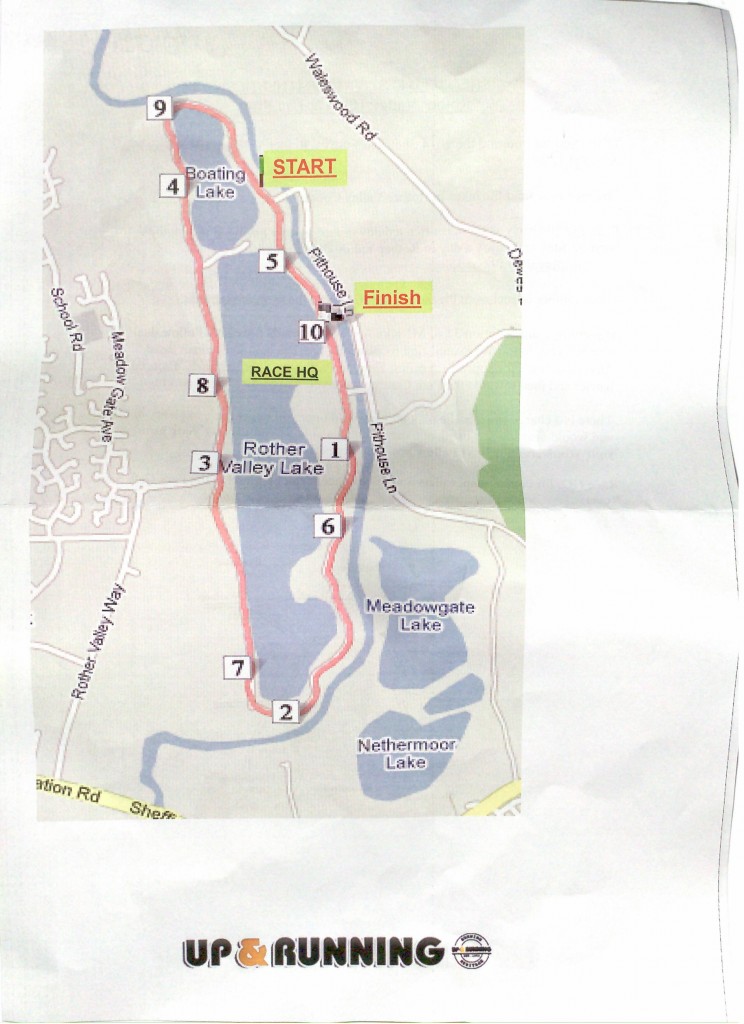 On the 18th of November DDG held its AGM after lunch which was provided by Feast we had singing and dancing with Eric and Pam. At 3pm the business meeting was held, were we looked at finance and how funding will affect us in the coming year.

Sheila, Louise, Peter and Lynsey gave a shirt personalised summary of how they felt the last year had been although there was mixed feelings about what the future held for us we are all committed to providing a person centered approach and a positive experience for everyone connected to the group.

As part of the Told in South Yorkshire Advisory group, Sandra and Lynsey attended National Dementia Care Awards held in Nottingham on 6th November. The advisory group had been nominated for the Ken Holt Memorial Award, an award given for work supporting life story work. Although we didn’t win, it was an opportunity for us to dress up and celebrate what we have achieved. 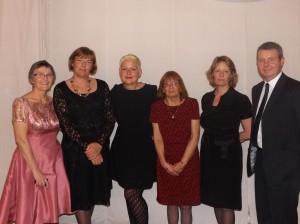 Lynsey felt privileged and humbled after recieving the mentor award, she said “its a great honour to work with students who are are passionate about person centered care and promoting the voice of carers when working with people living with dementia.” 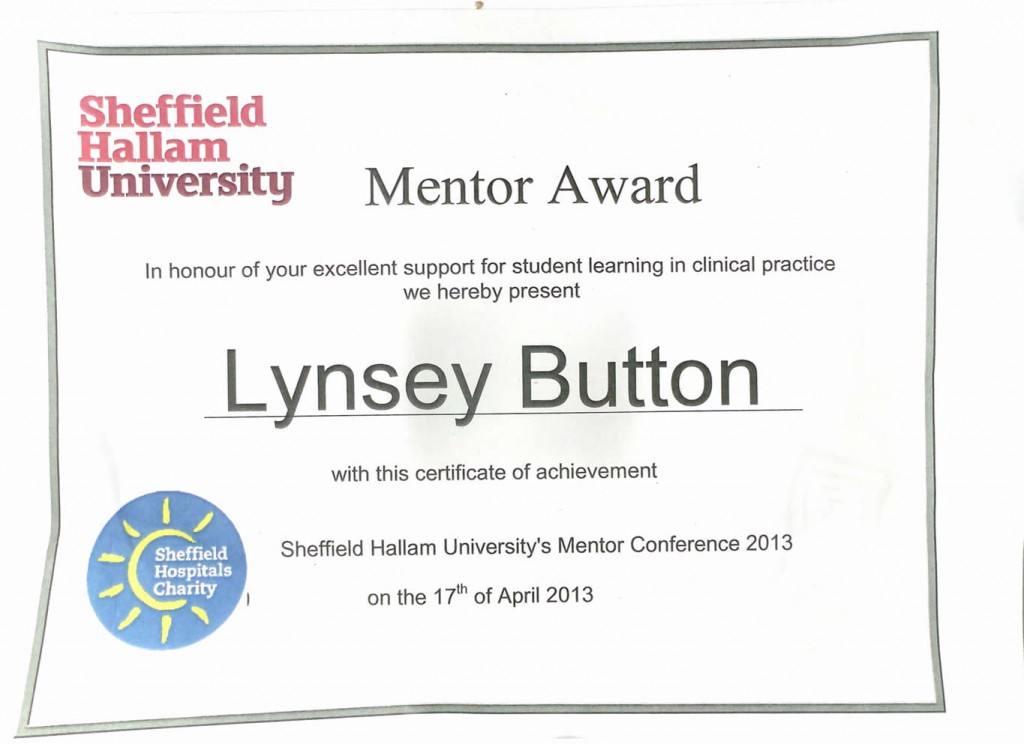 “On 9th July 2013 some members of the Darnall Dementia Carers Group participated in a focus group for the Valuing Active Life in Dementia (VALID) research study. This research aims to develop a community occupational therapy programme for people with mild to moderate dementia and their family carers, living in the community.  This occupational therapy programme is based on work done in the Netherlands, which found benefits to people with dementia in their ability to carry out activities, quality of life and mood. For carers, quality of life, mood and sense of competence also improved. This programme was also found to be cost effective. 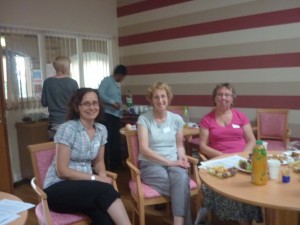 The group members talked to researchers from the University of Sheffield about the occupational therapy programme, sharing their experiences, giving their thoughts and views. This will help inform the development of the programme. We would like to thank all those who participated very much indeed.  We greatly appreciated it. Their thoughts are important to us and will help inform this research. The VALID research study is funded by the National Institute of Health Research. For more information please go to: http://www.ucl.ac.uk/valid/index 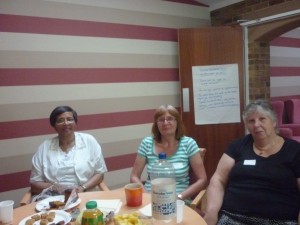 Service users, volunteers and staff at Darnall Dementia Group met with at team from the University of Sheffield to share their opinions about the Sheffield Dementia Information Pack. The Pack is designed to provide useful information and advice about dementia, and provide ‘signposts’ to key sources of support in Sheffield.

The team from the University of Sheffield are keen to ensure the Pack contains what people with memory problems and their supporters actually want and need to know. After introductions, and a sandwich lunch and drinks the discussions began. One of the volunteers, Will, had devised a step-by-step approach to discussing the main sections of the Pack. There then followed one-to-one conversations with all service users during which their key observations and comments were noted. After a welcome break for refreshments in the sunshine a final group discussion was held to seek a consensus about the kind of information about dementia desired by service users. 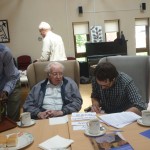 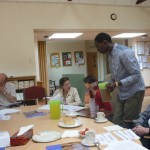 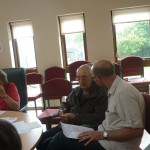 David Reid, one of the team from the University of Sheffield, said afterwards: “On behalf of the team, I would like to thank the service users, the volunteers and Lynsey for organizing this successful consultation session today. We have learned a great deal that we can use in our plans for the Pack. For example, we learned that the positive advice in the Pack about how to ‘live well’ with dementia was particularly valued. Some service users talked specifically about the importance of there being sources of ‘hope’ after the diagnosis. Also, we learned that the directory of services in Sheffield contained in the Pack was valued as it offered ways of meeting other people. Meeting other people and being able to talk was identified by service users as really important. Finally, we learned that some people would appreciate a spoken version of the Pack. Many thanks again to everyone who helped make this such a useful and enjoyable session” 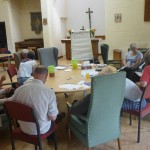 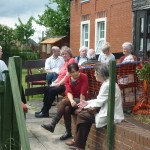 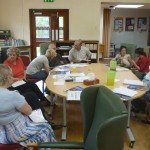 The Sheffield Dementia Information Pack is updated every 6 months and can be downloaded for free from www.sheffield.ac.uk/snm/dementiapack. Paper copies can be requested by emailing David Reid (d.reid@sheffield.ac.uk) or Tony Warnes (a.warnes@sheffield.ac.uk).

Darnall Dementia Group> has been actively participating in an on-going study undertaken by a PhD student from the University of Sheffield. The aim of the study is two-fold.  Firstly, to increase current understanding of the ways interest may be stimulated and interaction encouraged by using an assortment of enjoyable activities uploaded onto touch screen computers. Secondly, to challenge the assumptions that people with dementia may not benefit from such contemporary technologies. 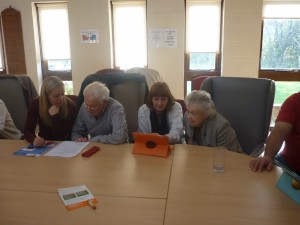 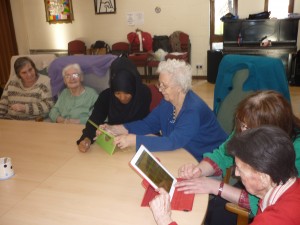 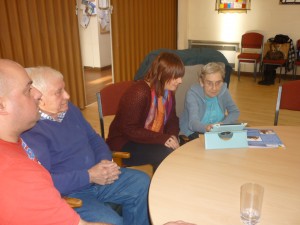 The study was carried out over four weeks and all the group members, volunteers and staff at Darnall got involved with interest and enthusiasm. This group is already characteristic of strong friendships and feelings of wellbeing yet participation during this project heightened interaction, communication and laughter. Introducing the group to the technology was deemed successful and it was felt that everyone involved enjoyed and benefited from their participation. The researcher considered the groups involvement to exceed her expectations and found her own involvement to be ‘a complete joy from beginning to end’.